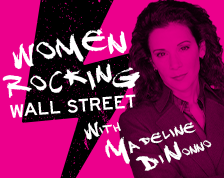 This guest is one for the ages. We sat down with The Geena Davis Institute on Gender in Media, CEO, Madeline Di Nonno to discuss ways they’re encouraging television and other media to infuse intersectionality, diversity and inclusion in their content.

Founded in 2004 by Academy Award Winning Actor Geena Davis, the Institute is the only organization working collaboratively within the entertainment industry to engage, educate and influence the creation of gender-balanced onscreen portrayals, reducing harmful stereotypes and creating an abundance of unique female characters targeting children 11 and under. The nonprofit’s slogan is, If she can see it, she can be it.TM

I’ve been following Geena and her organization for quite some time. When I joined as a member to support the organization, I dreamed of having this episode’s guest on my podcast. What an interview!

10:36: How the Institute was brought to fruition through Geena Davis’ realizations as an actress and mother.

13:47: What resources they’re developing to aid content creators in achieving gender equality from the developmental stage.

23:26: Why there are not only a lower number of female characters, but they also speak and are on-screen far less than their male counterparts.

27:34: The importance of paying attention to what your kids watch.

The book on social media media success in the financial services industry.
Speak Up, Step Up, Make it Happen with Minda Harts and Christine Brown-Quin...

Conversation and Care with Dr. Joy Lere
Scroll to top