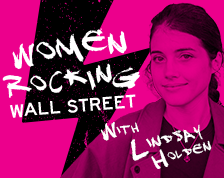 Episode 74: In It For the Long Game
Guest: Lindsay Holden

This weeks guest is the CEO & co-founder of Long Game, a personal finance app that encourages users to save money while winning cash prizes. Users of Long Game can win from 10 cents to one million dollars. A million dollars?! In her interview, Lindsay Holden discusses her fascination and experience with behavioral economics and how it sparked the idea of Long Game. From a simple interaction to a full gamified experience,  you can now level up, win Crypto and cash all through saving on the Long Game app. You can start winning prizes by simply connecting your bank in the application. With characters and animations, it truly makes the gaming experience enjoyable, magical, and pleasant. After two years, they already have hundreds of thousands of users whose average engagement is daily. Lindsay holds a B.S. in Chemical Engineering and an MBA from the University of Colorado, Boulder. After school, she helped launch an early stage venture capital firm, Formation 8 where she got to learn the process and get exposure. After two years in venture capital, Lindsay quickly became inspired by entrepreneurs and wanted to try it out herself. Before Long Game, she co-founded the Applicant Auction, the primary auction for Top Level Domain names which held over $500M in auctions and over $1B in escrow before being acquired. Today, Lindsay’s focuses on the growth of Long Game, influencing those to save. Start saving and receiving rewards by downloading the Long Game app in the app store!

To Bee or Not to Bee
Scroll to top