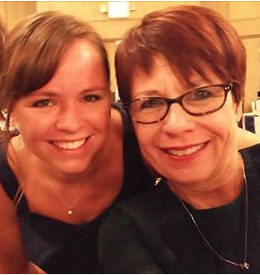 Episode 45: Don’t Tell Yourself No, Let Others Do It for You
Guest: Kim Shaw Elliott and Anne Elliot

This week’s episode of The Women Rocking Wall Street Show is special because we have a mother and daughter duo. Both women are in financial services, each with interesting personal stories. Kim Shaw Elliott began her career as a litigator and eventually decided to combine her knowledge of the law with a Master of Business Administration. She now serves as President and in-house ERISA Counsel of Independent Financial Partners (IFP) Plan Advisors, a division of financial partners located in Tampa, Florida. IFP Plan Advisors works with 150 specialists in the retirement plan arena and provide services to around 1700 retirement plans.

Anne Elliott graduated from the University of Missouri 4 years ago and she has been working with Edward Jones for over 6 years. Anne began her career at Edward Jones as an on-call Branch Office Administrator while still in school, thanks to advice from Kim. After training with an Advisor over spring break, Anne knew she wanted to gain more experience. She picked up the phone and began calling various Edward Jones branches to see if she could fill any openings. She was successful in her search and has been with Edward Jones ever since. Anne is currently in the Client Strategies Group and has been in that position for 6 months.

There were two things that helped Anne secure her first position with Edwards Jones – networking and rejection. Through the networking Kim had done in her career, Anne was able to connect with the right people. Once she had some experience, Anne wasn’t afraid of rejection when she picked up the phone and began calling. She had learned in graduate school not to tell yourself no but rather to let others do it for you. She knew that rejection promoted personal and professional growth, and while it was hard if she hadn’t taken the chance, she would not have started with Edwards Jones at such an early stage of her career.

Both Kim and Anne work in a male dominated industry. For example, while Kim was a litigator, she had an instance where a judge thought she was a secretary. Anne has seen the male dominance within the industry but she is also seeing it slowly changing. Her career advice is to always do what’s right for the client, and that should be at the base of every decision. Anne also recommends honing your networking skills, because this industry is all about relationships.

The book on social media media success in the financial services industry.
Moving from Gender Diversity to Gender Balance

Becoming the CEO of Your Life
Scroll to top